A champion at soldering

A champion at soldering

2010, she won the Swedish Soldering Championship (SSC) and also a ticket to the World Soldering Championship (WSC) in USA. There, she finished in an honorable third place. When the SSC once again was held this year during the SEE exhibition April 17 to 19 she hesitated but was later convinced to enter the competition. And with the least mistakes and the best time Linnéa Gyllner, from Inission TRIAB, again stood there as the Swedish Champion.

Congratulations Linnea!
You thought of yet another victory?
-Thank you! No, I did not expect at all to win again. I was very nervous even though I competed before. All contestants before me had been rejected so I was thrilled and happy that I even got approved.

Which class did you compete in?
-Class 2. First of all, the judge checked if there was a connection then the quality and ultimately the time. If the quality was approved. (In addition to Class 2 you have Class 1-hobby soldering and Class 3 Military, beautiful and durable. Red. Note.)

Was the arrangement the same as in the WSC?
-Not at all like the WSC. In the SSC you were modifying an already mounted board. In other words you removed components and then replaced them with new ones. And besides, in the WC, a judge stood next to me while I soldered. 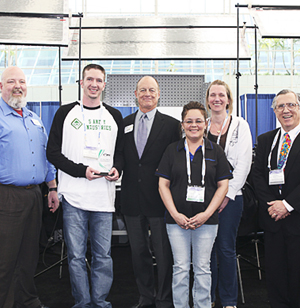 Linnea, second to the right, contestant and jury during WSC in San Diego.

The WSC in hand soldering was held during IPC APEX EXPO in San Diego this year. After the contestants had qualified through rallies in different parts of the world they now stood there. The best of the best, face to face. And one of them was Linnéa Gyllner from Inission TRIAB in Stockholm.

What was it like to be third best in the world?
-I wanted to win, of course, but I’m still pleased with my efforts. And besides, what a once-in-a-lifetime experience – the competition, the exhibition, new friends, outings, USA. I am extremely grateful.

Were you nervous?
-I was terribly nervous. Luckily my hands didn’t suffer. But it was a huge relief when you could leave your workstation.

How did you compete and what did the jury look at?
– We competed in the IPC-A-610 Class 3. All started at the same time, we got a workstation each. Before us there was a sealed bag of components, circuit boards and a note with instructions. When the start signal went, we had 45 minutes to solder on all components. The jury looked if we placed the right component in the right place, how much solder we used, the polarity, how you were working and how you left the workplace. It had to be neat and tidy. If anyone ended up on the same points the jury looked at the time. In other words, quality before time.

What did you win besides the honor?
-Aa, it was just a fantastic experience. But the winner got 1000 dollars. At the SSC this year I got an optional course from SWENTECH. I also got a PACE soldering station from DESAB.

What qualities do you need to be good at soldering?
-You need to be quick with your fingers, careful and have a steady hand. If you also think it’s fun to solder it’s an advantage of course. I´ve also had good teachers here at Inission TRIAB. There are many talented people here.

How long have you been doing to compete in soldering?
-It started with the SSC 2010. A few of us here at Inission TRIAB went to see how far we could go. I won and Nina Malm finished third. This year Jenny from Inission Munkfors came fifth.

Well, will there be another WSC for you now?
– We’ll see about that!

Thanks and good luck Linnea!