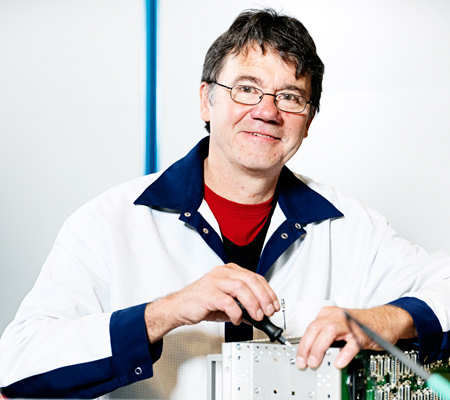 Inission can trace its roots back to the 1970s. 1973 was the year FABEC was founded as a development company in Gothenburg. EDC came about 10 years later in 1983, and started out as a subcontractor.

In the late 1980s and early 1990s, FABEC and EDC developed into two efficient, well-functioning manufacturers in the EMS industry. Things were going so well that FABEC started up a second plant in Tallinn in 1993, and EDC moved to larger premises in Munkfors the following year.

The middle of the first decade of this century were glory days for both EDC and FABEC, with combined sales of SEK 500 million and over 350 employees. The second half of the decade was hit by the financial crisis, and in 2007 EDC had new owners. Following an investment in more efficient processes and the introduction of the Lean approach in the organisation, EDC recovered its market position in 2008 and it was time to look to the future. In 2009 FABEC was acquired by EDC and a new corporate group was formed.

In 2010 the new group developed into a competitive, dynamic total supplier of services in electronics manufacture and management. The time was right to show the group’s new side, and in spring 2011 the companies changed name and came under the joint brand name Inission – the industry’s first total supplier.

The Inission Group continued to grow by acquiring and improving strategically selected operations. In 2011, Triab Electronics (later Inission Triab) was acquired and the following year Mikromakarna were bought in Pajala (later Inission Pajala). Inission also became the largest owner of the Finnish contract manufacturer Incap Oyj in 2013. During spring 2015, the Board decided that Inission would be noted, a natural development when the company grew both organically and through successful acquisitions. On June 10, 2015, it was a big day for Inission, when chief owners Olle Hulteberg and Fredrik Berghel finally rang the bell, announcing that trading in Inission AB’s shares was launched on Nasdaq First North in Stockholm.

In order to offer customers better geographical proximity in the Skåne, Småland and Öresund region, Montronic AB was acquired in Sösdala in the summer of 2015 (later Inission Montronic). Inission already had many customers in Mälardalen and Stockholm, and in April 2016 they became more through the acquisition of SKEAB Elektronik AB. Inission then had six subsidiaries that covered the whole of Sweden. Inission Pajala in Norrland, Inission Munkfors in Värmland, Inission Gothenburg, Inission Montronic in Skåne and Inission Triab and Inission SKEAB in Stockholm. Inission also consisted of the wholly owned subsidiary Inission Tallinn in Estonia. Thanks to the ownership of Incap Oyj, Inission also had access to a large production unit in Bangalore, India. Together, Inission could now meet customer expectations in all respects.

In June 2016 Inission bought the Onrox Group which consisted of factories in Malmö and Borås and also a Danish sales company. With a purchase price of 40 million SEK , it would be Inission’s largest business so far and now Inission almost doubled its annual turnover from 340 to well over 600 million SEK. Meanwhile, a merger of the factories in Stockholm was going to result in a next generation pattern factory. With the acquisition of Onrox, there was now an opportunity to create powerful units in Gothenburg and the Öresund region that would make Inission a player to count on in all Swedish metropolitan regions.

Following the acquisition of Onrox, an intensive period followed where three co-locations was completed in less than a year. The purpose was to gather all the skills and resources in one place and create powerful units in all Sweden’s metropolitan areas.

With the new factories Inission now could offer its customers a whole new dimension of production capacity, broader expertise and greater flexibility. It also created good opportunities for continued expansion. By the end of 2017, Inission had five factories in Sweden (Stockholm, Malmö, Borås, Pajala and Munkfors) and one in Estonia (Tallinn).

From 2007, Inission was successfully managed by the owners Olle Hulteberg and Fredrik Berghel, but in 2017 they decided to step aside. The operational part would now be managed by Inision’s new CEO, Björn Lifvergren, while Olle and Fredrik could focus on Inision’s continued growth through acquisitions.

Geographical proximity to customers is an important part of Inision’s strategy and with a number of Norwegian companies in the customer portfolio, Inission sought a suitable company to acquire in our neighboring country in the west. The long-awaited establishment took place in Norway’s technology center Trondheim at the end of 2018, when Inission acquired the well-managed company Simpro Holding AS. Simpro was Norway’s fifth largest contract manufacturer of electronics with a turnover of 184 million norwegian crowns. Now, Inission, with a turnover of almost 1 billion Swedish crowns, was well on its way to qualifying among the top 5 largest electronics manufacturers in the Nordic region.

In early 2019, the Board of Directors and management agreed that development should also be part of Inission´s strategy. In April of the same year, Inission acquired Sweco Elektronik in Västerås – a factory with both a production section and a development section. This meant that Inission could now begin to offer more development and construction. Sweco Elektronik later changed its name to Inission Västerås.

In the beginning of 2020, Inission strengthened its position as a complete contract manufacturer through the acquisition of HY-Tech Comp Oy, a company with factories in Lohja (Finland) and Lagedi (Estonia). As a manufacturing service provider in electronics, mechanics and electro mechanics, the acquisition resulted in Inission broadening its product offering to its customers. At this point Inission had factories in nine cities around the Nordic countries – Stockholm, Västerås, Munkfors, Borås, Malmö, Trondheim, Tallinn, Lagedi and Lohja.