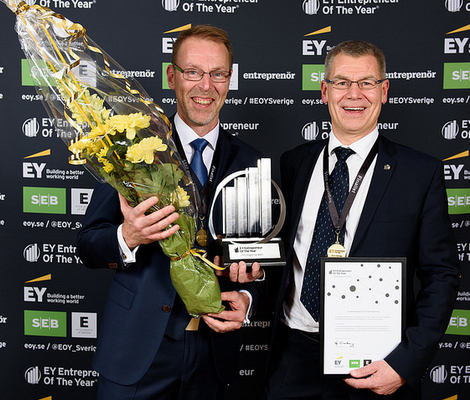 Inissions founders Fredrik Berghel and Olle Hultberg was appointed during Thursday evening to Svealands foremost entrepreneurs in EY’s entrepreneur competition “EY Entrepreneur Of The Year”. They will now represent the region in the swedish final that will be held in Stockholm City Hall in January.

EY Entrepreneur Of The Year is the world’s premier awards for entrepreneurs. It is the first international award for entrepreneurs with a clear vision and strong leadership skills that build successful companies. The competition takes place at regional, national and international levels in more than 140 cities in more than 60 countries. An external jury assesses the contractors for the criteria entrepreneurship, economic development, strategic direction, the influence of the outside world, innovation, personal integrity and influence.

Background
2007, Olle and Fredrik bought the troubled contract manufacturer of EDC. Although they did not know anything about electronics manufacturing the acquisition was the start of their owner companies Inission. In five months, they managed to turn EDC from a loss of one million per month to break even, and since then Inission acquired and changed several other electronics companies. In total, the Group currently has about 190 employees and a turnover of approximately SEK 300 million.

The jury commented
In an internationally competitive environment, they have through a systematic and structured management model and in a very committed way managed to create a company with great potential for further growth. They simply do things differently.